I used to advertise the heck out of the fact Toy House had the largest selection of toys under one roof of any store in the area. In our heyday we had over twice the selection of a Toys R Us and five times the selection of the Walmarts, Targets, and Kmarts of the world. Back in the 80’s and 90’s when bigger was better, this seemed to be the perfect calling card.

And it was—at least for drawing traffic. 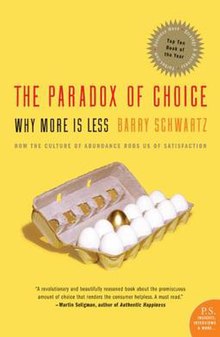 Sometimes, however, the super large selection was also a detriment to sales. Having too many options can lead to Analysis Paralysis. Barry Schwartz called this the Paradox of Choice (in the book by the same name).

While we like having freedom of choice, when we have too many choices, the process of selection bogs down.

I was thinking about this the other day while I was out shopping. I needed a closet deodorizer. The store I was in offered nine or ten different options. I had no clue. They all seemed to do about the same thing. I didn’t recognize any of the brands so I made my decision based on price.

Is that the way you want customers shopping in your store?

It was the perfect example of the paradox of choice. Had there only been two or three items, I would have studied the differences between them and chosen a product based on features and benefits. But with nine items, instead of seeing differences, I only saw similarities, so I based my decision on brand and price.

This is the Trader Joe’s philosophy …

Limit the selection to make it easier for the customer to choose based on the criteria of the product.

From this you could conclude that it is better to curate a great selection than to just offer more than your competitors. In many ways you would be right.

There is still something to be said, however, for having the largest selection. It is and always has been a traffic draw. Stores like Lowe’s, Home Depot, Staples, and JoAnn’s still rely on the perception of unlimited choices to drive their business.

The trick to making it work is having a staff that can curate your large selection that drew your customers in into a smaller selection from which they can make a choice.

I worked with my staff to do the following:

When you have too many choices, while the traffic it draws is nice, you’re forcing your customers to shop based on brand and price (and often the lower prices win).

When you curate the choices, you help your customers shop based on features and benefits (and often the item offering the most benefits wins).

PS If you are a smaller store, by all means curate the selection in advance, but if you have the space, don’t be afraid to have several choices based on the different “solutions” they provide. Just make sure your staff knows how to curate the choices down for each individual customer. Remember, everyone walking through your door has a different problem to solve.