The best stores have a staff that listens, that repeats back what a customer says and asks questions to clarify everything so that there is no misunderstanding. We may not be the best listeners all the time, but we’re working on it. Would you be surprised to know that the last ten staff trainings were on communication?

I read that last line from the 2008 passage and immediately opened my 2008 file with the notes of all our staff meetings. (Yes, I have kept those notes all these years. You never know when you’ll need that info again.) Did I really do ten straight staff trainings on communication? Yes, indeed.

It started on January 14, 2008 with my favorite staff training activity of all time where we “raised the bar” and everyone had to go over it. On March 10th of that year we worked on how to communicate with customers “when something goes wrong”. On April 7th we focused on communication among team members so that we could pass customers to other sales people, make sure all areas of the store were covered, and have better communication between our buyers and our sellers.

When I got to October 20th, the memories hit me like a tsunami. I remember when I got the idea for this meeting. My Goal for the meeting was to help my team learn how to listen better, ask better questions, and decipher what customers were trying to say. As with all my staff meetings, it started with … This will be a successful meeting if my staff learned the importance of asking questions and understanding that even when the customer doesn’t know the name of the product, with a little work we can figure out exactly what they need. 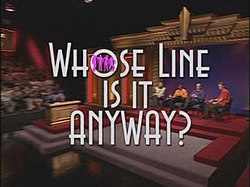 I was awake one night flipping channels when the television show Whose Line is it Anyway? with Drew Carey came on. I knew instantly the Task that would lead us to our Goal.

The staff was split into two teams to play a series of four games.

The first game was called Questions. One person from each team squared off. They were each assigned a character and then they were given a product. The two then had to try to sell the product to the other person with two rules. First, they could only use questions. Second, they had to stay in character. The game went until one of the rules was broken.

The second game was Worst Ad Ever. Each person drew a product name out of a hat. They had to go find the product and then do the worst infomercial ever for that product. You might think this would be easy, silly, and pointless. The staff, however, found it to be a little more challenging. First, they had to know the product. You can’t act dumb about something until you are smart about it. Second, they learned more about each product that was featured. Mostly, though, they learned more about what not to say so that they would catch themselves and each other whenever they went into some Ron Popeil inspired pitch.

The third game was my favorite. I called it Santa’s Sack. Four people got up at once and drew product names out of a hat. Each person now had to pretend he or she was that product sitting in Santa’s Sack getting excited about the child who was about to receive them as a gift. They had to hold a conversation with each other about that excitement and their recipient without saying what product they were. The rest of the team had to guess the products.

Not only were they learning to talk about products based on what they did rather than what they were, they were tapping into the excitement that each item they sold was going to be a gift for someone special. They were learning to transfer that excitement onto the customer.

The last game was Toy Taboo. In the game Taboo you are given a word you need others to guess. You are also given a list of words you cannot say, words that are taboo. I created several cards with different products and related words they couldn’t say. For instance, LEGO was one word. The taboo words were Construction, Brick, Building, and Plastic. The lesson was simple, learn to describe toys in unique ways and you’ll be better at deciphering the descriptions our customers gave for toys they didn’t know the name.

PPS If you look at this post as a Staff Training post, one added benefit of the games we played was that it got everyone up and acting. When you have to act and perform and be goofy in front of your peers, you lose your fears of interacting with strangers.

PPPS If you look at this post as being about Communication, listening, asking questions, and clarifying are three amazing tools that will help you close more sales.